The works of Christa Sommerer, Laurent Mignonneau, and Jacques Perconte share the space of the Charlot Gallery, directed by Valerie Hasson-Benillouche. There, we find a generative video by Jacques Perconte who previously filmed a sequence that was shot before being treated with extreme precision by compression algorithms. "In the northeast of the island of Madeira, from the top of the cliffs, you can see a rock about a hundred meters from the coast, lapped by the waves [...] The ocean never ceases to renew her salty caresses," a voice says, while all the particles of the image are renewed without ever repeating. The French artist envisages his filmic landscapes in a resolutely pictorial manner. Of the applications with which he experiments, he retains only the approximations. Everything seems controlled to the viewer, even though nothing was really planned. Before an exhibition, Perconte will often modify his "settings," so as to better adapt to the context, thus protecting the spectator from any form of repetition. The structure of the even caresses lavished upon the Madeira rock by the waves, renews even further. 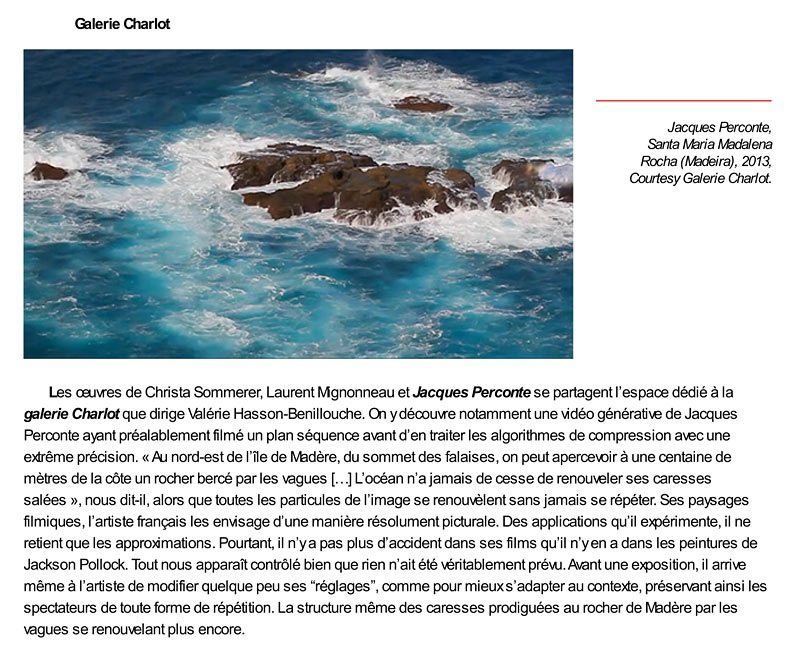